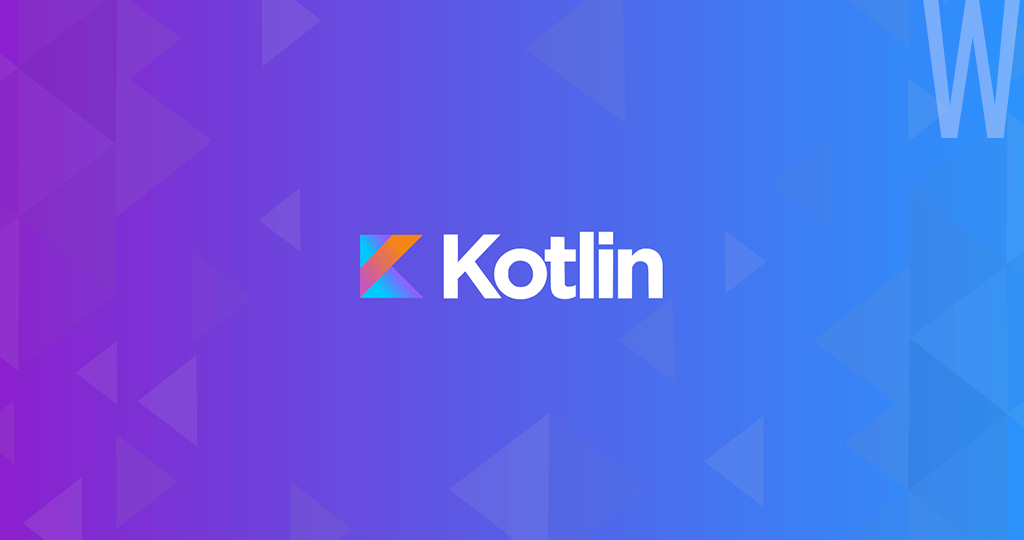 Few languages are as efficient and user-friendly as Kotlin for anyone developing an Android app today. Uber, Pinterest, and Square are among the top businesses that have shown confidence in Kotlin. Kotlin is loved by both developers and Android app development companies because it is a highly compatible option for app development. In fact, according to some global reports, Kotlin is increasingly becoming more popular among Android developers. As a result of its greater safety than Java, Kotlin has made it easier for android developers to make mistakes-free, concise, and easy-to-maintain applications.

Furthermore, Kotlin brings all the advantages of most modern programming languages to Android, including being cross-platform and all-purpose. With Kotlin, Android app developers can maintain their apps more quickly, write more succinct code, and avoid errors.

In spite of its open-source nature, Kotlin remains useful thanks to its many capabilities. It is intended to address issues that Android app developers have been dealing with for some time. It answers the questions raised in Java and provides developers with greater flexibility, safety, clarity, and tooling support.

A Russian company called JetBrains develops software products and released the cross-platform programming language Kotlin back in 2010. Most organizations started developing android apps with Kotlin rather than Java, because it was simple, clear, safe, and secure for all users. Kotlin fast became one of the most popular programming languages for creating Android applications since it was flexible, and open-source, and provided a variety of simple programming tools. Kotlin is a great choice for Android application development for a number of reasons. Some of the explanations for selecting Kotlin for Android programming include: 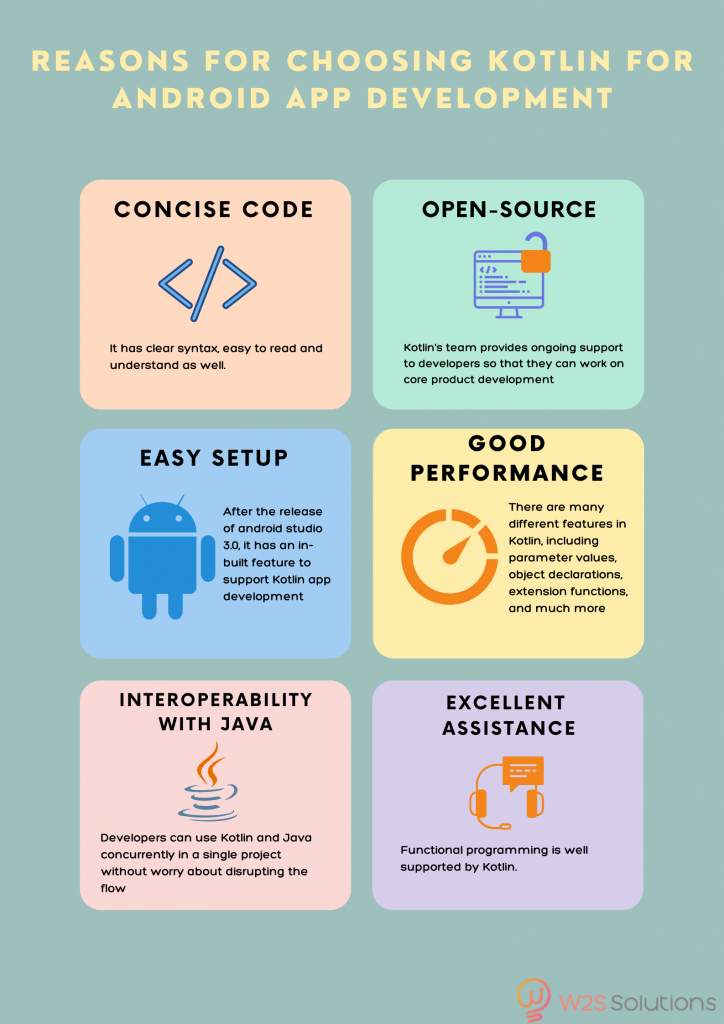 To accomplish any task, Java often requires numerous lines of code in a specific order. The main benefit of using Kotlin for android app development is that you can achieve the same goals with fewer lines of code. By eliminating long-line code, developers can focus on more important issues that are more likely to contribute to the success of the project. It is easy to read and understand Kotlin code because it has a clear syntax. The inter-developer maintainability of the code is enhanced greatly as a result.

Also, Android apps developed in Kotlin are smaller because their code volume is lower. Having fewer lines of code also allows for a faster production rate because mistakes are more easily detected.

Kotlin was established as an open-source language in 2012. Kotlin’s team provides ongoing support to developers so that they can work on core product development. High-quality applications can be created with Kotlin programming language.

The byte code structure is mainly responsible for how quickly Kotlin applications operate. Lambda functions run more quickly thanks to Kotlin’s support for inline functions. The process of Android app development with Kotlin offers a wide variety of useful features that speed up routine development tasks when compared to Java. There are many different features in Kotlin, including parameter values, object declarations, extension functions, and much more. This enables Kotlin to effectively maintain the code base while also accelerating the event time.

Since Kotlin and Java are completely compatible, developers may use both languages simultaneously in a single project without having to worry about the flow being disrupted. All they need to do is add extra tools and the necessary frameworks without interfering in the current process. You can use all of your Java code as well as Kotlin functions in your Java project. This means you may quickly and cleanly call your Java code from a Kotlin program or the other way around. Because Kotlin is designed to be entirely backward compatible with Java, developing Android apps with Kotlin is incredibly simple and convenient. Therefore, you can mix and match code as necessary without your app breaking, as opposed to completely rewriting your Java application in Kotlin. The Java code can then be later converted to Kotlin code.

It is simple to learn and create Android applications using Kotlin, making it one of the best programming languages. A user can easily understand the code without the need to practice it repeatedly since it was designed in such a way. Kotlin is easier to use than Java when it comes to creating classes and writing syntax.

Kotlin’s inlining allows it to perform better than Java. Functional programming is well supported by Kotlin, as well. You won’t be alone in the market because there will be a wealth of resources, forums, and examples.

Kotlin is a dynamically typed, cross-platform language with type inference. Considering the advantages of Kotlin language in the Android app development era, you would do well to learn about them. The following illustrations explain the interesting facts about kotlin.

On the 12th anniversary of the initial commit in the Kotlin repository, here is the tweet from the official account!

This week was the 12-year anniversary of the initial commit in the Kotlin repository! Here are 12 interesting facts about Koltin.🧵

Retweet and share your passion for your favorite language!❤️

Business benefits of switching to Kotlin

The app’s maintenance will be easier and more affordable as it becomes more fault-proof with Kotlin. In addition to being more compact than Java, Kotlin also speeds up development; rough estimates indicate it can cut up to 40% of code lines. As Kotlin becomes more universal, your app should be able to move from one platform to another. Furthermore, a new framework attracts talented software developers to adopt this new technology due to its efficiency. A simpler and easier-to-understand code reduces the likelihood of errors by making it more difficult to commit  them, and much easier to detect them.

As more businesses use the language, there is a good chance that demand for Kotlin app development will exponentially increase. Kotlin is completely compatible, making it simple for businesses to switch over for Android application development. Since it increases productivity and is an effective programming language, the time has come to try learning Kotlin for development processes and take advantage of new opportunities in Android mobile application development and accelerate their learning curve. If you switch to Kotlin, keep in mind to plan it carefully and draw on the skills and experience of developers. The Kotlin programming language is suitable for developing Android apps. Getting started with Kotlin android development services is easy – simply get in touch with one of the best android app development service providers, Way2Smile Solutions, for more information on how you can use Kotlin for your Android app development projects.

A. The best-in-class features of Kotlin make it a great choice for building Android apps. It is easy to integrate existing applications into Kotlin code, which reduces errors in code. The goal should be to have fewer lines of code but to improve readability if possible. It is true that fewer bugs occur when less code is written properly. Using Kotlin, you’ll be able to build apps that are more readable, simple, and easier to develop.

Q. How does Kotlin differ from other programming languages?

A. Although Kotlin is now a preferred Android app development language, the Kotlin programming language is used by more than just Android apps; other applications also use it. Data science, web development, and mobile development across multiple platforms can all be conducted with the language.

Q. How did Kotlin become so popular?

A. Featuring a lightweight, expressive, concise, and feature-rich design, Kotlin has become one of the last generation’s leading programming languages. In the android development world, Kotlin has the potential to overthrow Java’s dominance, but it hasn’t yet proven that it can do so.

Q. Why is Kotlin appealing to businesses?

A. In the case of a business, switching to new software is a deliberate decision.

It will also provide companies with better technical support and other capabilities. Furthermore, it will facilitate information sharing among members of the Android app developers group.

Lower development and ongoing maintenance costs for Kotlin projects are a huge benefit for any company. Kotlin has a plethora of excellent language features, as well as simplicity, which ensures better quality and a faster turnaround time.

Finally, businesses can easily transition to Kotlin, making the entire process easier for everyone. This, combined with simple language learning, removes any barriers to success

Q. How does Kotlin compare with Java for the development of apps?