Xamarin for Android App Development :
Patronage for mobile-based strategies has been found to be rising steadily and the use of mobile devices has firmly picked up and expected to exponentially grow in the coming years. Xamarin, the modern cross-platform development software, enables developers to achieve robust cross-platform app development in simple, yet efficient manner. Business owners and organizations across the globe get to avail a bouquet of services when they sign up for Xamarin mobile application development for android. 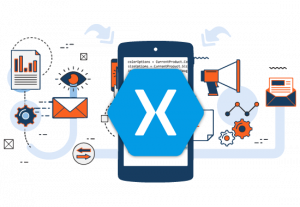 With the need for developing mobile apps increasing in a constant way, developers and Android App Development Companies are in the lookout for the right technology to develop apps quickly and efficiently, while offering users the most responsive and reliable experience. And in the race to achieve providing fast and effective solutions to clients through mobile apps that run across the major contemporary platforms, Xamarin becomes their natural choice.

Xamarin allows developers to have common coding programming for android & also for multiple platforms. Code reuse is one major factor that makes Xamarin stay ahead of the contemporary technologies. With Android OS taking the world by storm in the recent years, it is only natural that developers need a robust tool to help them come up with mobile apps that run and perform well on multiple platforms while having an added weight on Android devices. Offering reduced development time and high application performance, Xamarin mobile application development for android provides all that today’s developers seek.

Why is Xamarin Considered the Most Appropriate for Android App Development ?

Xamarin gives flexibility in terms of writing single code and saves time and money on both iOS and Android app development processes. In addition to that, it is enriched with an architecture having visual design platform for developing native-like mobile applications and testing suites, Xamarin includes a nugget style component store and native library support. Xamarin is considered the most preferred framework for covering all major mobile platforms such as Android and iOS. The rich features of .Net framework libraries are added advantages here from the developers’ standpoint.

It is more common for well-established enterprises and businesses to be focused on faster time-to-market and also to be able to share and maintain technology stacks quickly.

The Role Played by Xamarin in Future Mobile App Development
Developers are able to gain the ability to craft mobile apps with great styling power and novel layouts while using Xamarin. Xamarin is commonly found to be used in large organizations that already use Microsoft technologies such as C#, ASPNET, and .NET. Using Xamarin for building mobile apps is easier for them, given their expertise in C#. For Android app development, Xamarin proves to be a good starting point.

The following are the major positives of Xamarin mobile application development for android, making it gain great focus in the present as well as near future:

Xamarin has been found to emerge as one of the most robust tools in recent times for cross-platform app development as it helps reach myriad smart devices regardless of platform. Apps created using Xamarin focus on making use of standard native user interfaces; they provide a great user experience. Most business owners, get started with the mobile application development process with the Xamarin platform with respect to key features such as reducing time to market, cost-effectiveness, and leveraging a single technology stack.

Here, at Way2Smile Solutions, our dedicated developers deliver top-of-the-line both android and iOS app development solutions by leveraging the xamarin app development frameworks to ensure your business stays ahead of your competition.

Please find the various ways to connect with us for any help or suggestions regarding Xamarin App Development,
E-mail us : bd@w2ssolutions.com | Call us : +91 73387 73388 | Website : www.way2smile.com

7 thoughts on “How Good is Xamarin for Android App Development ?”